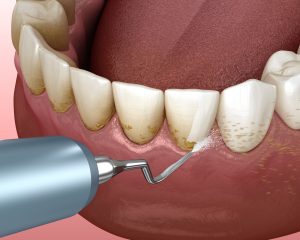 The notion that your oral health can be negatively impacted by a number of issues can seem like a daunting notion to comprehend, especially since it means that your preventive routine must be in tip-top shape. Indeed, common concerns such as decay and disease as well as uncommon issues such as TMJ disorder and more can plague our smiles in multiple ways, affecting appearance, structure, and overall function. In today’s blog, your Conroe, TX dentist takes a look at the common phenomenon of gum disease and how treatment is needed in order to keep your smile healthy.

When You Don’t Floss

Periodontal disease affects millions of individuals every year and is arguably one of the most common threats to your oral health there is. It is often caused by harmful oral bacteria making their way below the gum line and causing plaque to build upon the roots of your teeth.

While bacteria are present in every grin, they are often unable to cause such damage if one maintains a proper preventive care routine at home. This includes brushing to remove plaque from the surfaces of teeth, and it also means taking the time to floss.

Indeed, flossing plays a much more vital role than one might initially expect. When you consume food, some particles may become trapped between teeth, requiring a little help to remove them. If left unbothered, bacteria that feed off of these particles will swarm to the site. It is at this point that they make their way beneath the gums and wreak even more havoc. For more information about this process, reach out to our team today.

Bacteria Beneath the Surface

When these microorganisms make their way underneath the gums, they begin to cause a buildup of bacteria-laden plaque and tartar on the roots of your teeth. Because these areas are protected by surrounding tissues, the bacteria are able to thrive protected as well.

Individuals who experience the signs and side effects of periodontal disease often endure bleeding or swollen gums, loosening of teeth and detachment from the tissues that house them, and even tooth loss. If you are experiencing any of these signs, it is imperative you reach out to our team to learn your options today.

In some cases, patients are unable to recognize the earlier signs and thus incur significant damage before seeking treatment. To best address this concern, our team offers a deep clean aimed at removing the buildup of harmful plaque. This process, known as scaling and root planing, involves carefully but thoroughly removing these deposits and smoothing the roots to make future attachment more difficult.

Contact The Dental Centre of Conroe in Conroe, TX by calling 936-441-4600 to learn more or to schedule your appointment with our team today.

The Dental Centre of Conroe © 2021. All rights reserved. Accessibility Statement. Dental Website by