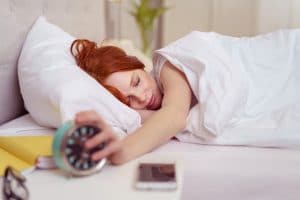 Sleep apnea is a disorder that can have a dramatic impact on the quality of your sleep. Yet, many people who have it don’t k now it, and the symptoms that it causes can sometimes seem random and without cause. However, having sleep apnea means that your quality of sleep is seriously diminished every night. Before long, that can have a noticeable impact on your daily life, as well, and you may notice a few signs of your lack of sleep throughout the day.

What happens when you have sleep apnea?

The characteristic symptom of sleep apnea (or obstructive sleep apnea) is the chronic and loud snoring that accompanies it. During a sleep apnea episode, certain mouth and/or throat tissues can become overrelaxed, or they may be particularly large, and can collapse into your airway as you sleep. The partial obstruction causes you to snore loudly, but once the obstruction is complete, the noise and your breathing will stop altogether. It can take several moments before your brain and body panic from the lack of oxygen. When they do, they’ll wake enough to clear the airway, but usually, not to a degree that rouses you from unconsciousness.

Why you won’t wake up immediately

Despite the fact that sleep apnea episodes involve interruptions to your breathing and sleeping cycles, the condition itself often remains unnoticed because the interruptions don’t fully wake you at night. Many people who have sleep apnea and don’t know it believe that they’re sleeping peacefully through the night, aside from the excessive snoring. Because of this, you may experience sleep apnea episodes for years, or longer, until the consequences affect your daily life enough to cause you concern.

Over time, the consistent interruptions to your sleep cycle, the labored and then ceased breathing, and the lack of deep, restful sleep can combine to cause several different concerns when you’re awake. Lack of deep sleep is nearly as bad as lack of sleep altogether, as it means that your brain and body don’t have the chance to properly rest and rejuvenate their cells. Your body and mind can grow increasingly more fatigued throughout the day, making it difficult to concentrate on tasks, remember things, focus, and stay energized throughout the day. If you experience these or other symptoms of sleep deprivation, especially if they’re accompanied by a chronic snoring habit, then you should speak with your dentist about the possibility of having sleep apnea.

Having sleep apnea can leave a lasting impression, and its interruptions to your sleep can become increasingly more obvious when you wake up. To learn more, schedule a consultation by calling the Dental Centre of Conroe in Conroe, TX, today at (936) 441-4600. We serve patients from Conroe and all neighboring communities.

The Dental Centre of Conroe © 2021. All rights reserved. Accessibility Statement. Dental Website by